We have had some large, but rather boring, urns and pots in front of the house. In 2007 I grew some red fuchsias, pink petunias and blue lobelia. Straight forward to grow and look after, but the style police were hugely offended; the house is rendered and painted a light cream.

Colour is not my strong suit, but my DW has a good sense for that, and my eldest daughter is considering a career in Design Engineering which requires skills in Architecture and Structural engineering, as well as Design, and consequently she has a very good eye for colour, coupled with skills for elegantly simple designs.

I bought some Topiary in Autumn 2008. Nothing grand, and mostly things that need a few years to fill-out, when I win the lottery I’ll be able to have mature plants NOW! but for NOW the budget only allows to buy small and grow on …

So I want to ring the changes and have the Topiary in the Winter, and something colourful in the Summer. Additionally there are some show-stopper plants I would like to try, so what I wanted was some containers that could be changed with the seasons.

So, for a Summer Project my No. 1 Daughter was tasked with making some Versailles Planters. They don’t look too much like Versailles Planters, other than that they are cube-shaped, which is a good thing as I don’t really like the look of vertical-borders with a large metal-strap-belt around them …

not really a thing of beauty, is it?

Some 3-ply, and a few bits and pieces of mouldings from B&Q, and some “outers” were made. She’s a clever sausage! and then we knocked up some “inners” which are wooden boxes of decent depth (so the things don’t need watering every 5 minutes) on legs, lined with some left over pond-liner. These are designed to fit on the fork’s of my mini-tractor, and thus easy to swap with the seasons.

One tip: I didn’t pay enough attention to drainage, so I’m going to need to sort that out this Winter before they are replanted for next Spring, and I heard somewhere that old corks, from wine bottles, do a good job. I’ve been collecting all our corks for several years now, as I hate to put things in land-fill, so Bingo!

UPDATE: I cut out the pond liner at the base and replaced it with weed suppressing membrane (the woven type) which provides much better drainage. (I left a “skirt” of 3″ so that the membrane sits on top of the pond-liner) 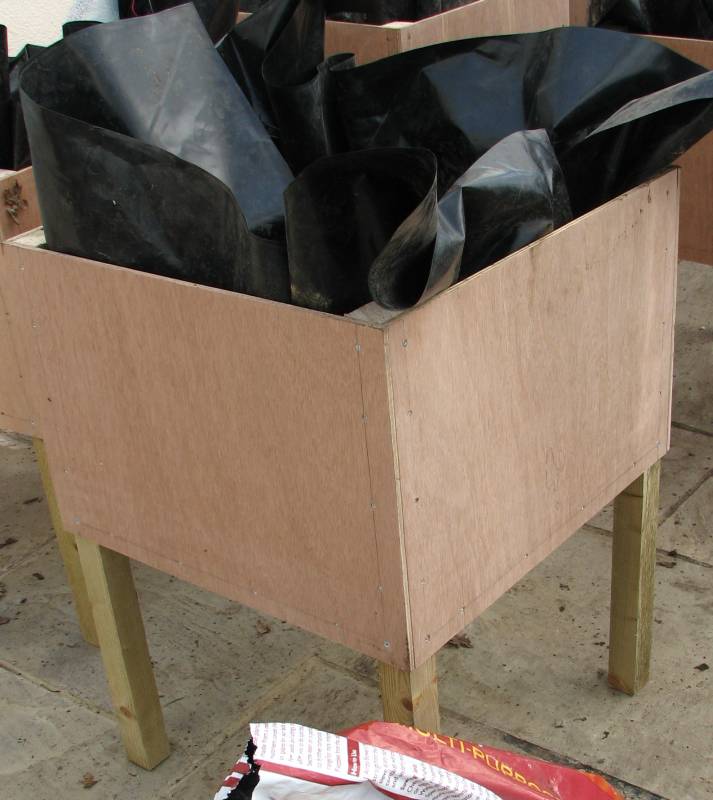 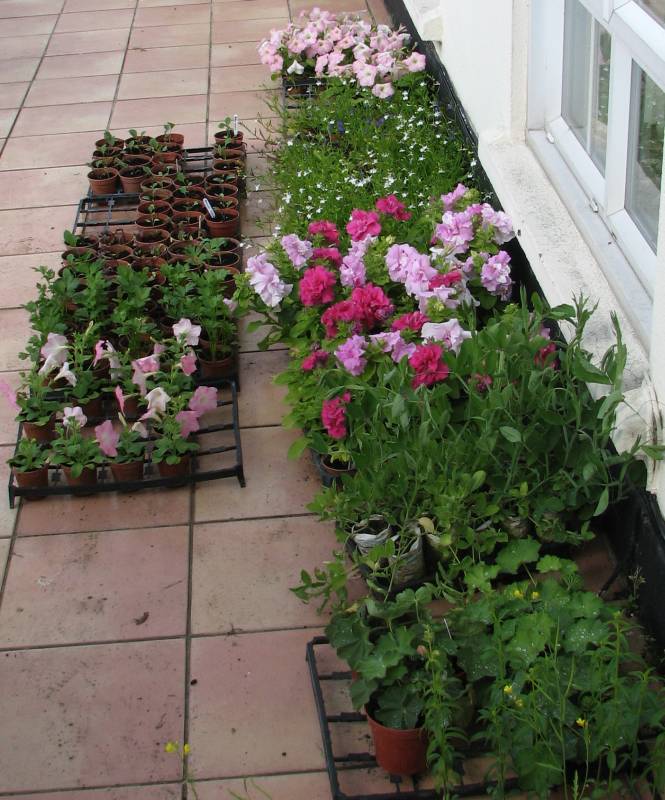 The Summer Bedding planters are kept in the conservatory as late as possible to bring them on as much as possible before moving them outside. Too big to harden them off by taking them in each night! but by early June the night temperatures are warm enough they can just go straight outside. 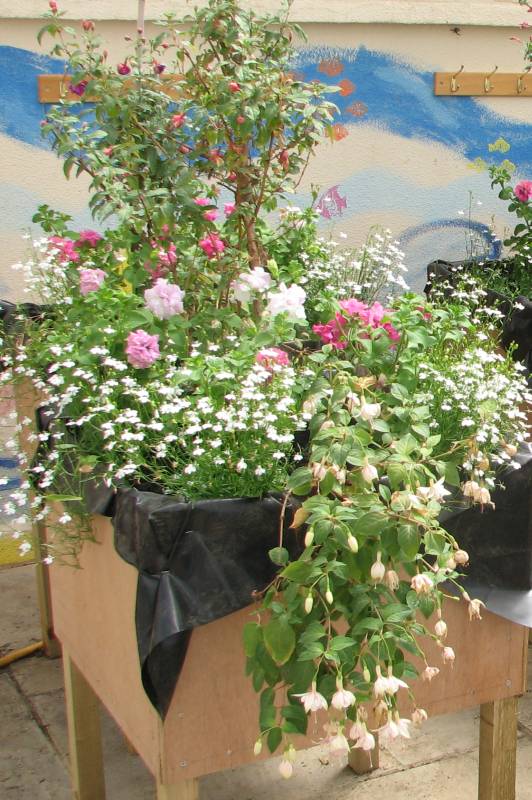 The “Outers” are 3 sides (the back is “open”) which then slide over the “inner”. Just 3-ply with some cut-out bits stuck on to provide 3D relief, and some slightly more fancy mouldings from B&Q to set them off. How hard can it be to choose a colour? after long debate the girls came round to my view that Black would look smart.

I just need to grow some more inspiring contents next year. At least I grew White Lobellia this year, rather than Blue!

Tulips sprouting (round the back, to be brought to the front of the house once in flower) 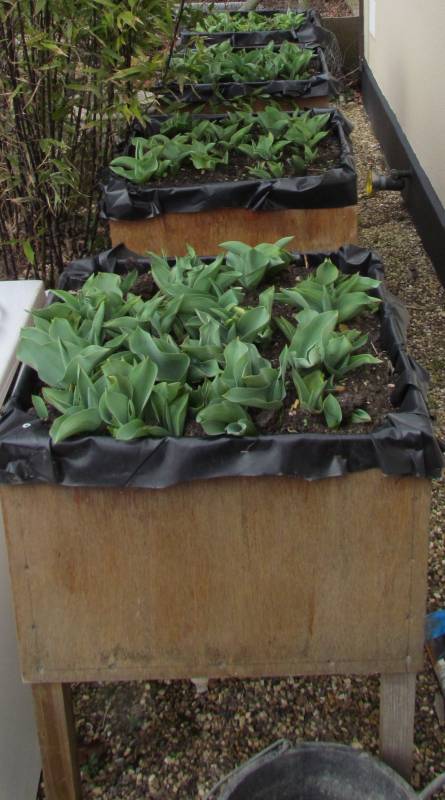 We’ve tried a number of different Summer planting ideas, but mostly they are a tall Fuchsia at the back, some trailing Loeblia to dangle over the sides, and some Petunias and Geraniums in the middle – boringly conventional I’m afraid 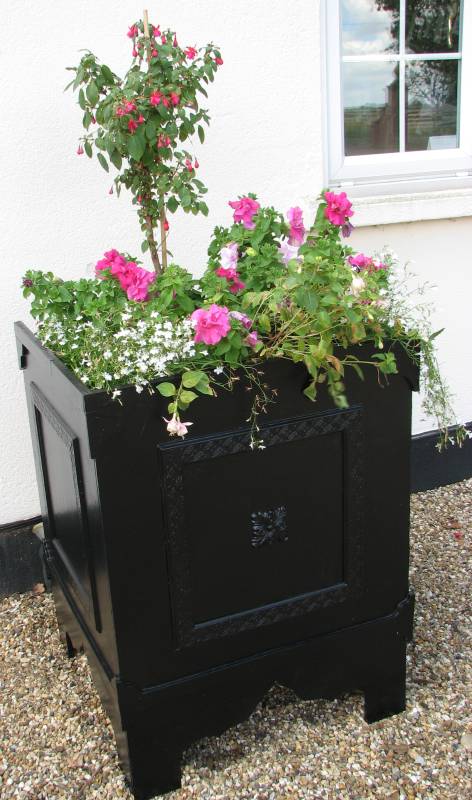 (One of these tall Fuchsias bust in the wind and I replaced it with Pennisetum setaceum “Rubrum” (copper leaf) which looked good, but it didn’t survive the Winter in the conservatory – might have been kept to dry in the Autumn before it was bought under cover)

Then in the Winter we revert to Topiary. We tried Standard “Lolly-Pop” Holly, but they were far too tall, it probably only needs a quarter-standard.

For 2012 we decided to have a foliage display. Less dead-heading, and in keeping with our current obsession which is the Exotic / Jungle garden. 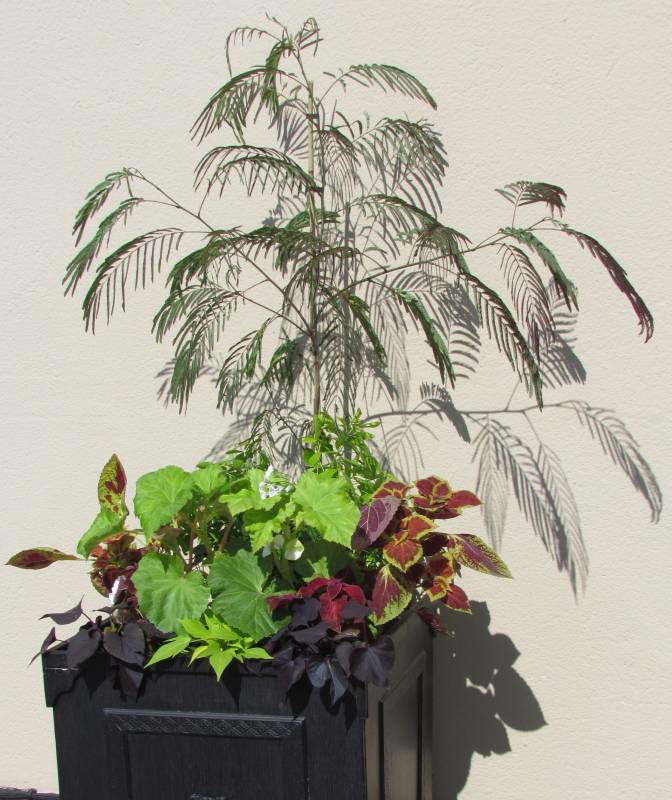 Planted at the back with Albizia “Summer Chocolate” (from the tubs last season – they have grown well!) / Phoenix canariensis Canary Palm (which as a bonus will be available for planting in the Exotic Garden next season) the golden Choisya ternata (forgotten the variety, might be “Sundance”), some White Begonias and Geraniums (they are at the back, so we should just see a few “balls” of white flowers), some Coleus that I grew both from seed and the more fancy ones from cuttings, and some Ipomoea (“Black Tone” and “Sweet Caroline Green”) at the front. There was also a finely dissected leaf chocolate Ipomoea in the garden centre, which I did consider and I think might have looked good)